The Movement Factory and a GIVEAWAY!!

If you've noticed my foursquare check-in's lately, you may have noticed that I've been doing a lot of Zumba lately. I tried Zumba over a year ago, and didn't like it. Turned out, it wasn't actually the workout that I didn't like, it was the instructor!! As with so many music-based workout, the instructor is really everything, and now that I've found the right one, I'm all aboard the booty-shaking train!!

So where have I been Zumba-ing? The Movement Factory! Based in Lakewood, I originally discovered The Movement Factory via a groupon that allowed me try out a number of classes for 30 days. My very first Zumba class with Bill, and I was hooked!! Now, if you're worried about your lack of coordination or rhythm, don't be!! While Zumba has some dance elements, it is more of an aerobic dance type workout. You may be a little lost in your first class, but you will definitely pick it up, and if you focus, you may even pick it up by the end of the first class! 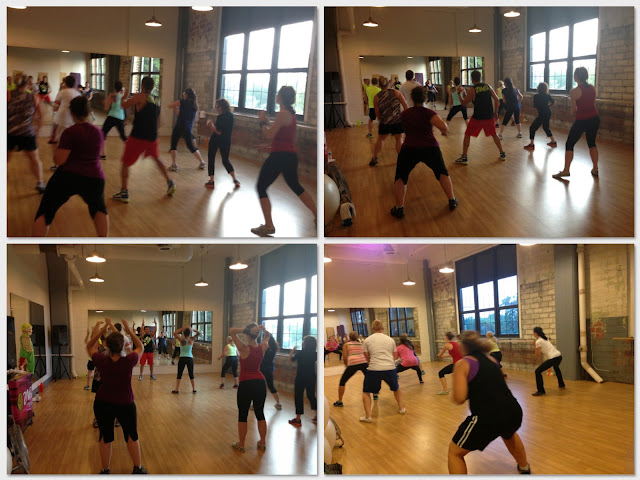 Bill is in the red shorts in the top panel. His energy is absolutely contagious!!

Besides Zumba, I also tried LaBlast, which is based on Dancing With The Stars. Its a slower pace than Zumba, so if you're intimated by trying a Zumba class, LaBlast may be a great place to start.

Since professing my LUUUURVVEEE for The Movement Factory, owner Alyssa was kind enough to sponsor a giveaway for my readers!! She is offering ONE LUCKY READER a 30-day unlimited class, valued at $69, which will give you access to all the following classes for 30 days!
- Co-Ed Yoga Stretch
- ZUMBA
- Pilates Mat
- Vinyasa Yoga
- LaBlast
- Masala Bhangra
- Ladies Booty Camp
- Dance Classes

The winner will be announced on Wednesday, September 18, 2013.

Disclosure: I received a 10% discount on my 10-class pass to The Movement Factory as a thank-you for spreading the word about this great gym. Needless to say, I am happy to do it, discount or not, because I LURVE the classes so much!! The Movement Factory has also provided the 30-day unlimited pass valued at $69 for this giveaway.
Posted by CLEshopaholic at 10:29 PM

I definitely want to try Zumba! I am planning on checking out The Movement Factory ASAP once I move to Lakewood this weekend :)

And I just tweeted!

ZUMBA! or Booty Camp... I don't know they all sound great.

AAND Liked and posted! ;) Thanks to you and Movement Factory for the opportunity!

..and I Liked and Followed Movement Factory.

Would love to try any of the yoga classes :)

ew i did it again ;) tweeted and status update

I would love the vinyasa yoga.

I would love to try the LaBlast class!

Masala Bhangra for sure,

I LUUUUUUUUUUUUURVE Zumba and would LOVE to try it at the Movement Factory!

I "liked" them on Facebook and also followed them on Twitter! ... I also tweeted that I wanted to win an unlimited pass!