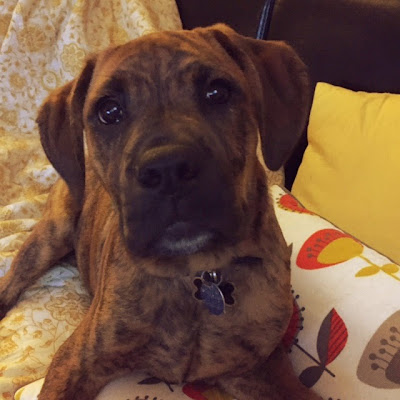 Its been about six weeks since we brought Webster home, and here's what we know about him:
1. He LOVES Clair. She is his favorite
2. He LOVES tennis balls. LOVES LOVE LOVES them
3. He's obsessed with smart toys (the dog toys that are rabbits in a hat, turtles in the mama turtle's shell, etc.)
4. He LOVES doggie daycare at The Mutt Hutt
5. He is SUPER snuggly when he's sleepy

But until last Friday, we had one unsolved mystery: WHAT was he mixed with?! We knew he had a lot of boxer--- he boxes. A lot. And he has a lot of other boxer traits, but his nose isn't all smushy like Clair's. We had a few guesses-- German Shepher, Rottweiler, Mastiff, Lab… but there was only one way to be sure…. a doggie DNA test was necessary. So, I did some research and ordered the most popular doggie DNA test, the Wisdom Panel.

For $84.99, they mail you a DNA kit. You swab the inside of your dog's mouth with two different swabs, and you have to be careful to not touch it to any other surfaces. The package itself has holders to help. You let the swabs dry for a couple of minutes, and in the mean time, register your DNA kit. When you're done, you put the swabs in the pre-paid package, and stick it in the mail. Really easy directions, you really can't mess it up.

Wisdom Panel will then email you when they receive your package. They tell you the complete test will take 2-3 weeks, but in our case, it took just about one. 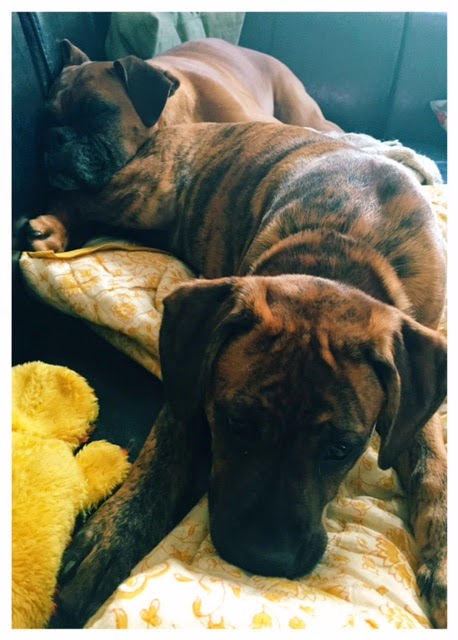 And this past Friday, we finally solved our mystery. Our silly puppy is mostly boxer as we suspected, but the second most identifiable DNA is that of Australian Cattle Dog! Definitely explains why he's so active, and why he loves all those smart toys.

Now, we just have to figure out how big he he's going to get!

Wouldn't have guessed that! Such a cute pup :)