Happy beginning of Fall, everyone!! I hope you had a great weekend, I know I did!!! Friday night, N and I scooted down to Reddstone to get some dinner. Wait, did I forget to tell you that we got a scooter?!??! We DID!!! N found this beauty on Craigslist, and with only 200 miles on it, it was a steal!! 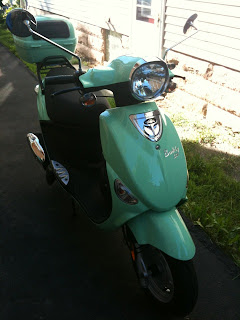 N and I ordered some lobster bisque (delicious), and the Lombardo with pancetta, which was very garlicy but good. 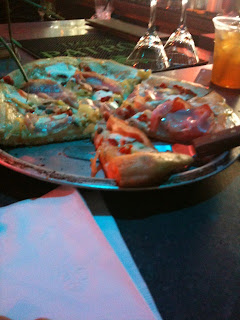 The Lombardo with Pancetta
Saturday, I took the puppies for a long walk in the Metroparks with clefoodgoddess, in an attempt to get them nice and tired so N and I could go enjoy Oktoberfest later than evening. Oktoberfest was SO much fun!!! I ate some yummy strudel, and N participated in a beer tasting. 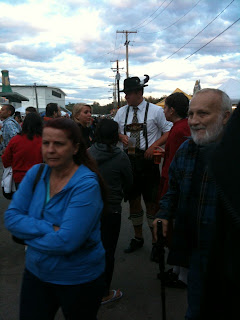 It was my first time at Oktoberfest, and I was pleasantly surprised by the number of people at the event. There were little weiner dogs everywhere (we missed the weiner dog races), and they seemed to be having a great time with their owners. There was also a fun little Jaegermeister stand that hosted a dance performance every hour, my favorite of which was a choreographed performance to Bad Romance by Lady Gaga, where the Jaegermeister girls danced around a giant inflated bottle of Jaeger. 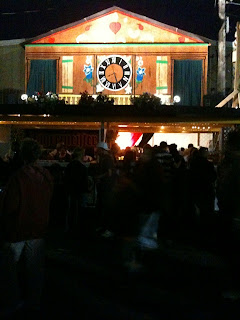 After a performace by The Spazmatics, it was time to get some kettle corn and go home.
Sunday was a busy BBQ-filled day. The first was hosted by Pedal Republik of Cleveland at the bike polo fields, oh-so-conveniently located across the freeway from the Air Show. N and I scooted down (I seriously love that scooter!)  to enjoy the festivities. To be honest, I have mixed feelings about the Air Show; on one hand its really pretty incredible, on the other hand, I think its such a giant waste of fuel and money! In any case, I did enjoy laying out in the sun, enjoying a few glasses of Mon Ami Haut Sauterne. Later that evening, we headed over to a neighborhood BBQ, where I showed off my baking skills with some Betty Crocker brownies. While we were over at the second BBQ, we decided to leave Clair uncrated, since we were going to literally be three doors down. That was a bad idea. We came home to this: 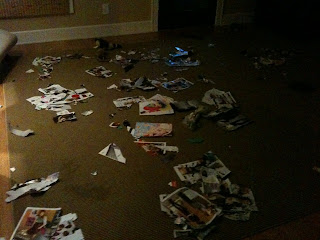 Apparently, Clair did not approve of the issue of Lucky Magazine that featured Jessica Simpson on the cover.
Monday was essentially a lazy day. In honor of Labor Day, I pretty much did nothing, at least for the first half of the day. The afternoon included another walk in the Metroparks (Rocky River Reservation this time), as well as a little swim in the stream. I know boxers aren't supposed to like water, but Otto LOVED splashing around!! 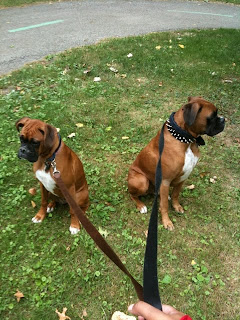 Even though the long weekend is now over, just remember that even though you have to go back to work tomorrow morning, its a short work week!!!
Posted by CLEshopaholic at 8:34 PM

Email ThisBlogThis!Share to TwitterShare to FacebookShare to Pinterest
Labels: fun things to do in Cleveland, summerlovin

omg what a seriously fantastic weekend! LOVE the scooter (very jealous too - mike and i always talk about getting one but haven't pulled the trigger), I'm so sad I didn't know you were at Oktoberfest earlier - I totally would have come - and OMG - Clair DEFINITELY did not approve of your Lucky issue - LOL!

Look on Craigslist! That's where we got ours, and it was a ridiculous deal.They don't have them all the time, but if you're not in a hurry, its worth looking into. N has his license and I'm taking lessons next spring so I can get mine too. Given my driving record on 4 wheels, its probably in everyone's best interest that I take the class : )