A party-filled weekend with NO PICTURES!

Wow! What a weekend its been!!

Friday, N and I picked the pups up from daycare and walked over to the Clifton Martini and Wine Bar for some drinks and some delicious clam chowder.  Seriously, if you like clam chowder, theirs is really good; perfectly clammy and very much homemade. Later that evening, we were over to Lara's supercute new Ohio City apartment. Unfortunately I don't have any pictures from the evening, but take my word for it; it's a lovely apartment and we had a fun time!

Saturday morning, bright and early, I had an appointment with the fabulous Anna Goldstein at Dino Palmieri. I've had highlights for a few months, and it was time for a change. Well, its a pretty big change compared to what I had, but again, I don't have any pictures (wow, I've been really bad with pictures lately!). While at Beachwood, I indulged in a little light shopping (you'll see the results through the week), and headed home to hang out with the pups and N before the highlight of the weekend, The Second Annual White Party.

When I read the plum's White Party post from last year, I was incredibly impressed by Matt and Sean's commitment to fabulousness. This year, I was fortunate to attend in person, and let me just say that no pictures or blog posts can do this party justice. As is apparently the trend this week, I have no pictures, BUT, I do have video.

I only recorded snippets on the dance floor (I was trying to get Sean in a dance-off) but I wish I'd taken my camera to share more of the festivities with you. Sean and Matt are wonderful hosts, and I can't wait for next year's event!!

Browns Sunday saw N & I in the muni lot with a large group of friends tailgating bright and early at 7:00 am. Contrary to prior reports, the Muni Lot opened way before 7 am; Browns fans will not be denied their tailgate. We took the puppies with us, and I think if they had a choice, they'd tailgate EVERY DAY!! They got tons of treat and lots of love, even from strangers! 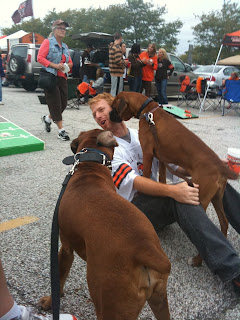 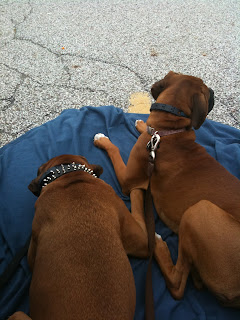 Good times were had by all! I can't wait for this weekend. I have a very special visitor flying in from Chi-town, and I'm taking her on a SUPER FUN tour of Cleveland, which will include Ingenuity Fest, a W 25th bar crawl, and Sunday Funday!!
Posted by CLEshopaholic at 10:07 PM

Email ThisBlogThis!Share to TwitterShare to FacebookShare to Pinterest
Labels: all the cool kids are doing it, Fun in Cleveland

OMG. I am messaging you right now. Thank god you posted this video. It cleared something up. LOL.