When I wrote this original post about Otto, I didn't think I would be writing this one so soon.

Two weeks ago, we received the results from the biopsy: undifferentiated sarcoma. Basically, it meant that the cancer was confirmed. It was a sarcoma, but there was no way to tell if it was the sarcoma of the bone, the membrane surrounding the spinal cord, the tissue surrounding it… not enough information to tell how aggressive it was, how fast it would grow back…. nothing. This past Tuesday, I took Otto for his follow up from surgery at Metropolitan Veterinary, and they were very pleased with his progress. And then things started to go very wrong.

On Thursday, he seemed to be struggling to stand up unassisted. By Friday morning, his right hind leg was partially paralyzed, and we knew what was coming. Friday evening, Otto's favorite people came over to say their last goodbyes-- we all sat on the floor on blankets, picnic style, surrounding him with love and kisses. Nick, Clair, Otto and I had a slumber party in our living room Friday night-- Nick held him in his arms all night. By Saturday morning, Otto was breathing really hard. By the time our vet Dr. Bob came over to our home around 1:30 pm, Otto's chest was starting to get paralyzed. It was time. Dr. Bob administered a powerful sedative, and Otto fell into a deep sleep-- cuddled in Nick's arms, as I held his paws and kissed his face. A short time later, the barbiturate. At that very moment, the sun came streaming through our windows, and I knew Otto was gone. Our baby boy, who brought us so much joy, had left us with this little last piece of sunshine. 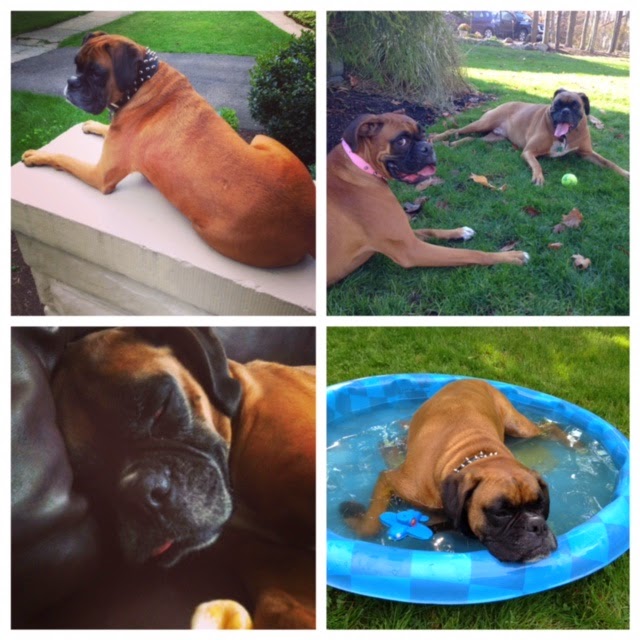 Otto was such a big part of our lives, both literally and figuratively. There is so much about him that I miss: the way he would push open the door to the bathroom, the way he would lay on the couch and look out the window, the way we never needed a doorbell because he would bark so loud anytime anyone came over, his grunts, his loud snoring, the way his tongue would fall out of his mouth when he slept very deeply, the way he sounded like he was deflating when I hugged him, his goofy smile and butt wiggle every time we came home, his kisses, staring into his big brown soulful eyes, kissing him on the top of his head, and even his stinky farts.

People have asked how Clair is doing: She was in the living room with us when Otto died, so I think she knows he's gone. Sometimes she seems lonely, but I can't tell if its really how she feels or us projecting our feelings on her. At other times she's perfectly herself-- perky, cheerful, cuddly, wagging her tail.

I won't speak for Nick's feelings, but as for myself, I would describe myself as emotionally fragile. Its an hour by hour thing. Sometimes, I'm at peace knowing that we gave him an amazing life, and that he had a beautiful, peaceful death and is free from pain. At other times, I burst into tears. I'm acutely aware of his absence, and it feels like I'm being stabbed in the heart. I know this will eventually turn into a dull ache, but in the mean time, its very raw. Grief. Its not a feeling I've really encountered before-- I've been incredibly lucky. I'm trying to take comfort in the fact that I know he loved us, and that he knew just how much we loved him.

People have asked whether we will get another dog-- yes. We are a two-dog family, and we will rescue a male boxer in time. Probably sooner than later.

But in the mean time, we continue to try and come to terms with his loss. Rest in peace, my sweet baby Otto. We love you forever and will miss you always.

There will be no more posts this week. Please feel free to leave your comments-- I read them all, even if I don't respond this week. Thank you for your compassion and understanding. XO

Oh I'm so sorry. We went through something similar with our dog. Even though it was the right decision, it was so hard. SO HARD. You all were fortunate to have Otto and Otto was so very lucky to have you all. He was well loved. You feel his presence for quite awhile.

I love you guys so much. You're great dog parents and you gave Otto the BEST life. Your hearts will heal, you'll save some other adorable boy that needs you too. Take care of yourselves! Xo.

Shibani, this is so beautifully written. I'm positive Otto will be looking over you guys for the rest of your lives - love lasts forever. *hugs and kisses*

Brought me to tears...you are such a wonderful mom. What a loving, peaceful goodbye for Otto, and you did the kindest, most loving thing you could do for anyone. Hugs to you and the family.

Your Facebook post broke my heart, & this one even more so. I'm reminded of how emotionally fragile I was upon losing my cat, who I called "my soulmate animal," & it hurts to think about someone else going through similar feelings. Sending so, so much love. <3

this is heartbreaking! Many never get to experience the unconditional love of a pet, and even though it hurts when they leave us, we are blessed to have had them! I have lost my share of beloved pets, and my heart hurt reading this. You gave Otto a gift, to ease his pain, and let him pass peacefully, surrounded by love!