This weekend in CLE/ Eating Tour of the W.Side: RoseAngel and Touch

There was so much going on this weekend that I have to split the recap, otherwise, you're going to have to read one looooooooong post, and I don't want to do that to you on a Sunday night/Monday morning. Coincidentally, it turns out this one is going to be two restaurant reviews.

So Friday, N and I decided to go on a date; he's been so busy with his final project that I've barely seen him for the past week. We decided to try RoseAngel (5800 Detroit Ave; doesn't have a website quite yet), which took the spot of the former La Boca. RoseAngel's only been open since July 7th, but you'd never know it; the service was impeccable and the food was DELICIOUS!! The concept is an upscale taqueria, so its gourmet tacos, SUPER YUMMY margharitas, and sides. 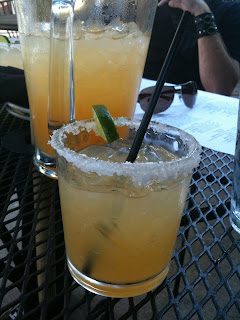 Intrigued by the menu, we decided to try the lobster nachos, which were lobster, avocado, with a soy-something drizzle (distracted by the margharita, I forgot what else was in the sauce. In any case, it was very good). 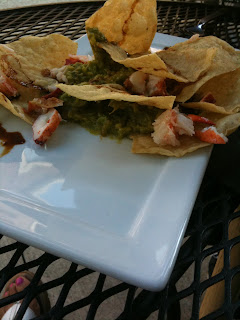 So, here's what I really like about the menu; there's a WHOLE lot of taco varieties, and quite a few vegetarian options for my veggies readers. AND, you can either choose 3 of the same kind, or mix it up, and get them a la carte! Better still, you get to pick between hard and soft shell. N and I both got soft shell, which is a white corn shell, but its thicker than the ones you get in the store, so it holds your filling together a lot better! 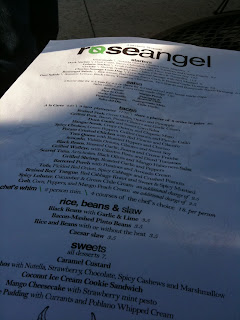 I ordered the tuna, spicy chicken, and braised pork. They all come with some coleslaw, which is unusual but quite refreshing. My favorite was the tuna; it was perfectly cooked, and the flavors were absolutely amazing.
We're definitely going to go back here; the challenge will be trying new items on the menu and not sticking to the ones we've already tried and enjoyed!
Saturday night turned out to be girls night with clefoodgoddess. We started out with dinner at Touch Supper Club. I know I've talked about Touch's hip-hop night before (incidentally the next one is July 31st!), but if you haven't eaten dinner there, you're missing out! 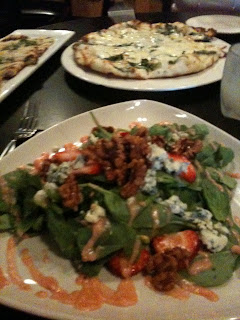 The spinach and strawberry salad was so good and perfect for a hot summer day!!!! On a side note, I really love candied walnuts! clefoodgoddess ordered the green pizza, which was also delicious. The crust is perfectly fluffy, and combination of spinach and arugula on pizza was fantastic. We're frequent visitors to Touch for their Sunday brunch (also fantastic), and looks like we're going to be there for dinner a lot more too!!!
After dinner, clefoodgoddess and I made our way to..... to be continued....
Posted by CLEshopaholic at 8:55 PM

Thanks for sharing wonderful ideas about weekend, and during weekend eating. Girls Night Out Ideas