I only have a short time until Season 2 begins, so I'm going to get straight to the point. DOWNTON ABBEY. If you're not watching this show, you are seriously missing out. I watched Season 1 via Amazon Prime late last year, and I was instantly hooked. Its a British period piece, set in a fictional town in Yorkshire. The series follows the story of the aristocratic Crawley family, including their household staff. It's so interesting to see the difference in lifestyle between the upstairs of the house and the downstairs (servants quarters), but both are filled with drama and intrigue. This show has everything- compelling story, great cast (including the awesome awesome Maggie Smith), drama, war, period costumes, family intrigue, star-crossed lovers, social change-- EVERYTHING!! Did I mention its part of the Masterpiece Classic on PBS, so you can feel intellectually superior as you watch it? 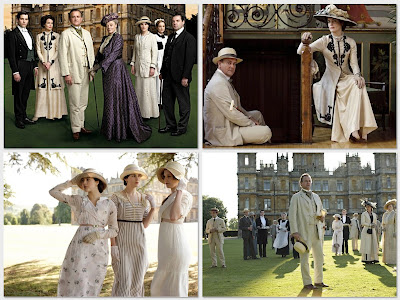 Just look at these costumes!!!! So glamorous, and people even got dressed for dinner at home!!! In the meantime, I will be watching in my PJs. The complete opposite of glamor. It happens...

Honestly, I've heard a lot of chatter about this show but never had any inspiration to check it out until now. You make it sound pretty darn good!