OMG you guys, its my 100th post!!! I can't believe its come so quickly. Its almost like the 100th episode of a TV Show. I feel the need to celebrate with cake. I think I'm going to stop by A Cookie and a Cupcake in Tremont to pick up a sweet treat.

A Cookie and a Cupcake opened in 2008, right after N and I moved to Tremont. I remember walking Otto (when he was just a little baby) past the store, while it was still under construction, wondering when it would open. 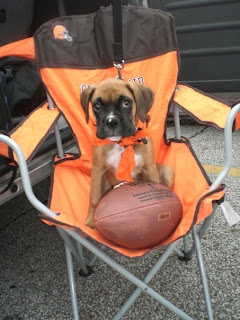 Baby Otto. He was so little.... (picture unrelated to post : ) )
When it finally did open (it really didn't take that long, maybe a month or so), it didn't disappoint. On my very first visit, N and I got there just as they were closing up, and they gave us an ENTIRE box of cupcakes, for FREE!!! One bite of the yummy carrot cake, and I knew there was no way we could keep those cupcakes in the house; I would've eaten every one and instantly put on 10 lbs. The deliciousness has continued since then, and I've been back numerous times to pick up cupcakes for various occasions. My favorite flavor remains the carrot cake, with the lemon a close second. 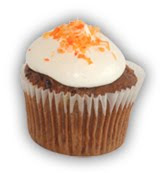 Lately, there's been a new entrant in the West Side cupcake market, with the addition of Main Street Cupcakes in Rocky River. My coworker Laurie had these at her 2009 wedding, and the Strawberries and Pink Champagne cake is absolutely delicious!! Main Street has more available flavors than A Cookie and A Cupcake, but if you asked me which one was better, I'd have a really hard time picking one. I guess the only solution is for you to go to both places and try the cupcakes and decide for yourself!! Yes, I'm a cupcake pusher.
Posted by CLEshopaholic at 6:20 AM

i am selling cupcakes at the lakewood farmers market on saturdays now too :) so you'll have to come try mine!!

My vote - please put an unrelated pup pic in ever post ;) I know Alexa is a staunch C&C supporter, but I'm personally a Main Street fan :) Their chocolate raspberry flavor? AMAZING!

Cio, I'll have to stop by sometime. Are you selling the doggie treats too? Otto and Clair were obsessed with them!

Alexa and Allison: exactly why I can't pick a favorite. : )

yes i am selling the dog treats too! i am making a batch right now :) as for cupcakes this saturday i'm making chocolate cardamom with a whipped ganache, banana caramel cupcakes, and zucchini spice cupcakes.