This past weekend, N and I attended the wedding of our friends Ryan and Susan at The Bertram Inn in Aurora, Ohio. Ryan and Susan are so cute; they had these little jokes they whispered to eat other during the ceremony- it was so charming! 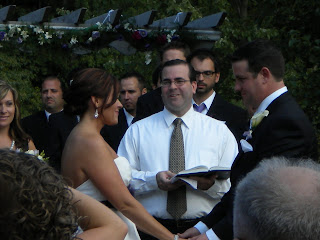 The happy couple. Susan's dress had this BEAUTIFUL purple sash that woulc also look super cute with a skirt. Particularly a high-waisted one...
This wedding had some great touches that I absolutely LURVE:
The place cards were envelopes stuffed with lottery tickets and pennies, which everyone scratched off during the groom's speech: so FUN!!
For the favors, you were provided with a box to fill up at the AWESOME CANDY BAR!!!!
And my MOST favorite of all, the wedding cake topper was a sculpture of their dog, Winston. 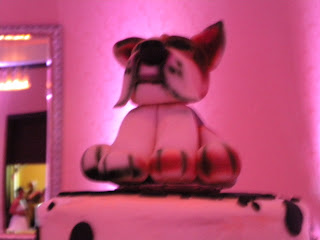 Wintson!!! He's an English Bulldog if you couldn't tell...
For their wedding present, I went off the registry. They had registered for wine glasses, so I got them a set of wineglasses from Banyan Tree (which is incidentally one of Susan's favorite stores, so if they don't like it, I'm 100% certain she'll find something else there to replace it). 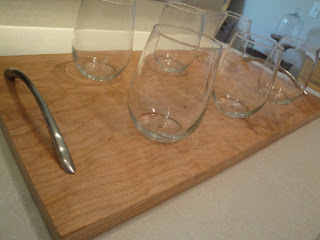 Although I bought these at Banyan Tree, the wine glasses and tray actually came from Canton Box Company, from their vist at the Tremont ArtWalk a little while ago. If you're looking to get some of these yourself, its another good news/bad news situation. The bad news is that CBC isn't making this exact piece anymore. The good news is that later this week, they will be restocking their etsy store with these: 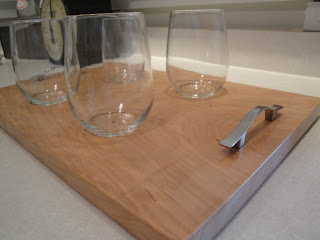 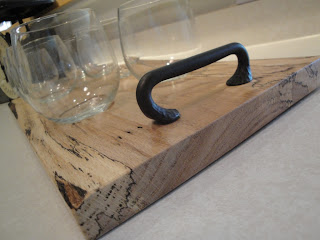 I'm a huge fan of stemless wine glasses (less tipping over) and you can never go wrong with a tray. Maybe even for breakfast in bed. Just saying.
Posted by CLEshopaholic at 7:52 AM

I saw that at Banyan and wanted to get it as a gift for myself. Glad we think alike! See you at spin tomorrow morning!