I've had such a great weekend; I'm really bummed that it's going to be over so soon! Friday night N and I met up with Jess and DBB at Momocho: I always forget how much I luuuuuurve their margaritas until I get there. The goat cheese guacamole is to.die.for!! (Little tip: if you want to visit Momocho, you should try and make a reservation, or at the very least call ahead and check on the wait)
After a yummy dinner, we headed over to Dragonfly Lounge for some drinks. It was my first time there and I was pleasantly surprised to find out they serve old fashioned cocktails made with fresh juices. The Moscow Mule was pretty good, although it pales in comparison to those served at Velvet Tango Room (the copper cups and bits of ginger make a HUGE difference!). I thinks it's interesting (and very cool) that a 2 mile radius in Tremont/Ohio City has not one but THREE amazing bars that serve classic cocktails made the old fashioned way (the third one is Speakeasy) ! Sure, they're more expensive than the traditional mixed drink, but on a night where you want to sip your drinks and have great conversation, they're worth every penny!

Saturday we enjoyed watching the CAVS kick some BULLS a** at Panini's where we made new friends (hello Tony and Colleen). The beer and yummy pizza resulted in a nap, which unfortunately led to an alarm malfunction, which in turn resulted in us missing The Roots concert! BOOOOOOO! But there's always a silver lining; we stopped by Anatolia Cafe for a late dinner with Ry and El and who should be sitting two tables away but Anderson Varejao AND Anthony Parker!!!! We ended the night at B Side where Questlove spun a three hour set of some amazing music including some awesome old-school hip hop!

This morning, I had a hair appointment at Beachwood Place; I like to schedule my appointments before the mall officially opens. Parking is much easier, and there's just generally fewer people. Anyway, a calendar malfunction (this has not been a good weekend for technology) resulted in me being one hour early! And then, I encountered the strangest thing: Mallwalkers!!! There were at least 50 of them, including at least 2 people with strollers! Whaaaaaaaaaat?! How do they even get in there so early?!?! Will someone please explain the appeal of walking around a mall in endless circles? Personally, if I have to work out indoors, I would much rather use a treadmill.

After my hair appointment, I made some stops at a few stores to look for a gift. After all, what would a shopping blog be without a little shopping? One of my favorite gifts for someone who likes/wants to travel is a passport case. If you prefer to shop in-store, Nordstrom, J. Crew, and Jule carry passport cases at various prices, and if you're more of the online type, zappos.com and barnesandnoble.com are good options. 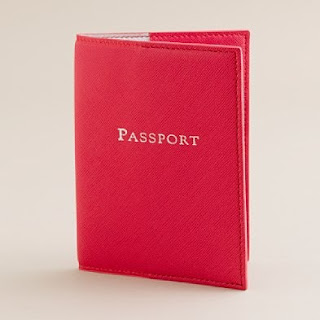 Depending on your budget and the occasion, you could also round out your gift with a travel guide (I personally like Rick Steves) and a travel pillow. Bon voyage!
Posted by CLEshopaholic at 4:16 PM