I'm sure you've heard all about Four Loko, which has now been banned, or is at risk of being banned in quite a few states. It is legal in Ohio, and this weekend, it made an appearance at our tailgate. 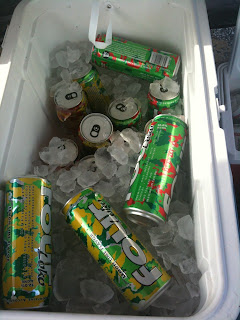 I'm not gonna lie, I didn't like it. The lemon-lime version isn't terrible, but the rest of the flavors taste like a mixture of cough syrup and jolly ranchers. DISGUSTING!! Its rumored to be the equivalent of 6 beers and a cup of coffee, so please consume with caution.

Have you tried Four Loko? What did you think?
Posted by CLEshopaholic at 5:29 AM

It's gross!! I think they are banning it here, or at least in college park.

Hahahhaahaha. No, it was too gross to have more than a sip. Although I did see someone hurl for like an hour after consuming 2. Blech.

We should have a 4 Loko party!