mmmm Licorice. And, a GIVEAWAY!!

So last week, I was contacted by respresentatives of Panda Licorice, who asked if I would review their licorice flavors and blog about it. Being a candy-lover, of course I said YES!! So come Monday, the candy arrived, and I couldn't wait to dig in! 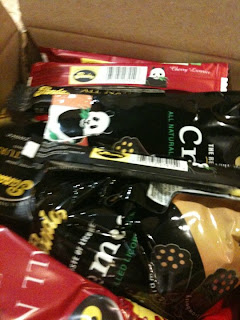 Panda has been making licorice in Finland since 1920, and its been sold in the U.S. since 1963. Over the years, they've definitely perfected their licorice, and it is absolutely delicious!! I was sent a few different flavors: regular black, creme filled black, raspberry, and cherry. Panda licorice is made with natural ingredients, so the fruit flavors are really fruity, and taste a lot like all natural fruit chews. The regular licorice has a perfect balance of licorice flavor; just right, without being overwhelming. I think these make the perfect mid-afternoon pick-me-up snack. Sweet, but not too much; low fat, and for 100 calories, a really delicious treat! These would also make excellent stocking stuffers, and unlike chocolate, would probably not turn into a goopy mess when placed near the fireplace (although I have not tested this theory, so try at your own risk).

I had N taste the licorice too, since its one of the few candy's he will actually eat (the man does not eat sweets. I mean seriously, who does that?!) He was watching football at the time, so I've edited to include only his candy related quotes. Here's what he had to say:
Black licorice: "mmmmm"... "Nice and chewy. Licorice-y but not too much"
Creme filled Black licorice: "surprisingly better than I expected". A few second later..."a LOT better than I expected. Creamy"
Raspberry: "its amazing". "Tastes like real raspberry, doesn't taste fake. I'm looking for the little seeds, it tastes that close to the real thing". This was followed by "I'm taking the cherry to work".

If you would like to try some Panda licorice, you can find it at Trader Joe's, Whole Foods, and also on Amazon. OR, you could enter my Panda licorice giveaway by doing the following:

Each of the above will get you one entry, so do them all for a maximum of 4 entries! This contest is open to U.S. Residents only, and winners will be announced the Wednesday before Thanksgiving. Winners will receive the following: 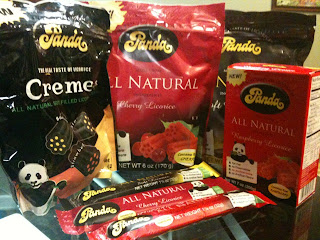 It's really really really good, and I'm not just saying that because they sent me free candy. Even Clair liked it (don't worry, we only gave her a tiny piece).  Good Luck!!!!
Posted by CLEshopaholic at 8:07 AM

Anything licorice or gummy related - but red vines would be my all time weakness, so I think this Panda licorice is right up my alley! :)

I luuuuuuuV licorice and these are really good. I can't wait to try the cherry! Yummmm

Shibs - the last anonymous is from me! HA Mel

Favorite candy?? Hmmmm....that's a tough one! Probably lemonheads - love those!

Love anything chewy, sugary and gummy. Will have to pick some of these up @ Trader Joe's this week.

Chocolate is my biggest weakness but this raspberry licorice sounds quite interesting! I might have to try some!

i'm gonna go with raisinets though!

My fave is milk chocolate.
donna444444@yahoo.com

I liked you on facebook and left a comment.(Donna Kozar)
donna444444@yahoo.com