Hope you had a very happy and safe Thanksgiving!! We had a wonderful time at N's parents. There were 12 adults, 1 baby and 2 puppies in attendance, and we had a blast. We ate, drank, played catchphrase (which is a superfun game and great gift/stocking stuffer for people who like to entertain), and I found that I really don't like losing. My favorite picture of the day was this one: 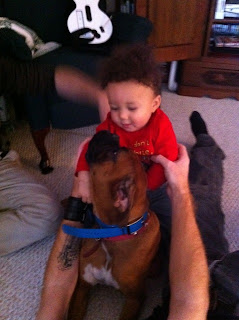 Our little nephew and Clair
Clair LOVES little kids. Our nephew is still in the army-crawl stage, and Clair would army crawl behind him as he crawled along the floor. SO CUTE!!!
As I mentioned in my Black Friday preview post, I was planning to stay away from the big box/national retailers, and I was mostly successful, with the exception of PETCO for dogfood, and Target for lightbulbs (and the aforementioned catchphrase), but I'm not counting those. N and I decided to start at the newly relocated Room Service (2078 W25th St), ﻿which was also hosting Made in the 216. The new store is significantly larger than the old location on Detroit Ave., and is really well decorated. Danielle has a fantastic eye for design, and she did this really amazing thing on one of the walls where she essentially created massive frames out of molding, and then wall-papered the inside. She has a bunch of stuff hung on the wall paper, so its looks like artwork within artwork. Of course, I don't have pictures, but if you have a massive blank wall, its a great idea to try out (I do recommend stopping by the store first to check it out in person).
While there, we picked up these: 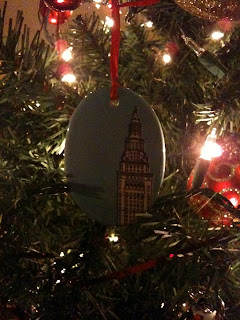 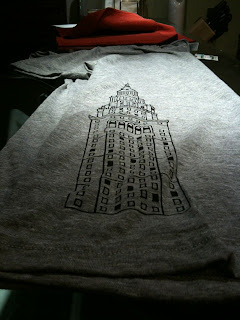 I can't wait to check out the new Room Service space!

Love the ornament- how cute!

Also, I have some responses for you about the private cooking lessons. I'll get them to you this week.